You're at the right place. Welcome to our new website.

Budapest, the capital of Hungary, or as often called the “Pearl of the Danube”, is listed as one of the world’s most beautiful cities on the UNESCO’s World Heritage list. But Budapest is also a lot more: Budapest has a million faces with an amazing history, a relaxingly green and quiet Buda side with the Castle area, the energetic Pest with it’s famous ancient and modern buildings and out of the ordinary nightlife, stimulating gastronomy including delicious Hungarian cuisine in its traditional and also the latest creative presentation.

The Opera House is not only one of the most significant art relic of Budapest, but the symbol of the Hungarian operatic tradition of more than three hundred years as well. The long-awaited moment in Hungarian opera life arrived on September 27, 1884, when, in the presence of Franz Joseph I. the Opera House was opened amid great pomp and ceremony. The event, however, erupted into a small scandal - the curious crowd broke into the entrance hall and overran the security guards in order to catch a glimpse of the splendid Palace on Sugar út. Designed by Mikós Ybl, a major figure of 19th century Hungarian architecture, the construction lived up to the highest expectations. Ornamentation included paintings and sculptures by leading figures of Hungarian art of the time: Károly Lotz, Bertalan Székely, Mór Than and Alajos Stróbl. The great bronze chandelier from Mainz and the stage machinery moda by the Asphaleia company of Vienna were both considered as cutting-edge technology at that time.

Equal with the Hungarian Parliament Building, it is one of the two tallest buildings in Budapest at 96 metres (315 ft) - this equation symbolises that worldly and spiritual thinking have the same importance. According to current regulations there cannot be taller building in Budapest than 96 metres (315 ft).[1] It has a width of 55 metres (180 ft), and length of 87.4 metres (287 ft). It was completed in 1905 after 54 years of construction, according to the plans of Miklós Ybl, and was completed by József Kauser. Much of this delay can be attributed to the collapse of the dome in 1868 which required complete demolition of the completed works and rebuilding from the ground up.

The architectural style is Neo-Classical; it has a Greek cross ground plan. The façade is anchored by two large bell towers. In the southern tower is Hungary's biggest bell, weighing over 9 tonnes (8.9 long tons; 9.9 short tons). Its predecessor had a weight of almost 8 tonnes (7.9 long tons; 8.8 short tons), but it was used for military purposes during World War II. Visitors may access the dome by elevators or by climbing 364 stairs for a 360° view overlooking Budapest.

The Dohány Street Synagogue (Hungarian: Dohány utcai zsinagóga/nagy zsinagóga, Hebrew: בית הכנסת הגדול של בודפשט‎ bet hakneset hagadol šel budapešt), also known as The Great Synagogue or Tabakgasse Synagogue, is located in Erzsébetváros, the 7th district of Budapest. It is the largest synagogue in Europe and the third largest in the world. It seats 3,000 people and is a centre of Neolog Judaism.

The synagogue was built between 1854 and 1859 in the Moorish Revival style, with the decoration based chiefly on Islamic models from North Africaand medieval Spain (the Alhambra). The synagogue's Viennese architect, Ludwig Förster, believed that no distinctively Jewish architecture could be identified, and thus chose "architectural forms that have been used by oriental ethnic groups that are related to the Israelite people, and in particular the Arabs". The interior design is partly by Frigyes Feszl.

The Dohány Street Synagogue complex consists of the Great Synagogue, the Heroes' Temple, the graveyard, the Memorial and the Jewish Museum, which was built on the site on which Theodore Herzl's house of birth stood. Dohány Street itself, a leafy street in the city center, carries strong Holocaust connotations as it constituted the border of the Budapest Ghetto.

Your best option is to walk along the cobblestone streets and discover Castle Hill at your own pace. Take your time, as there is a lot to see and do, and exploring Castle Hill can take an entire day. If you don’t have much time, visit Trinity Square, Matthias Church (Mátyás templom) and Fishermen’s Bastion (Halászbástya). Various events are held at Castle Hill year round. Our Castle Hill walking tour includes all the major sights, as well as recommended cafés and restaurants to stop for some refreshments. To get an insider's look into historic landmarks and learn about the past while strolling along (and beneath) the cobblestone streets sign up for the Mysteries of Castle District Tour.

Getting to Castle Hill: Take the Funicular from Chain Bridge; the public bus, called Várbusz, from Széll Kálmán tér (formerly Moszkva tér) or one of the many paths leading up to Castle Hill

The Széchenyi Thermal Bath is o­ne of the largest spa complexes in Europe. It's also the first thermal bath of Pest. It owes its existence to Vilmos Zsigmondy, a mining engineer. o­n his initiative, successful deep borings had been performed in the City Park, where later, in 1881 already an "Artesian bath" was in operation. However, this temporary type of bath was meeting the demands of the age less and less, so the Széchenyi Thermal Bath was built in 1913 o­n the basis of plans composed by Gyozo Czigler. The Bath was expanded in 1927 with a public bathing department for gentlemen and ladies and a beach site. In the middle of the 1960s, further transformations took place, including the creation of a group thermal section in bathing suits as well as a daytime outpatient hospital (complex physiotherapy department).

The reconstruction of the pools of the swimming section, their equipment with water filtering and circulation devices was completed in 1999. The so-called fancy bath includes a whirling corridor, underwater effervescence production, neck shower, water beam back massage installed in the sitting banks and many other services.

The water of the drinking well is a healing water with calcium, magnesium, hydro-carbonate, chloride, sulphate, also containing alcalics and a substantial amount of fluoride. Therapeutic suggestions: degenerative joint diseases, chronic and sub-acute arthritis and orthopedic and post-accident treatments. 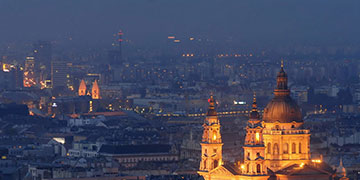 INFORMATION ABOUT COVID19
Read about our policies regarding the current situation:
More information

Did you find a better price in another website?